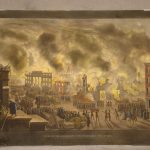 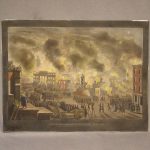 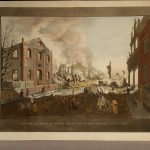 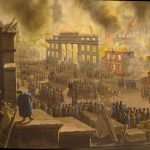 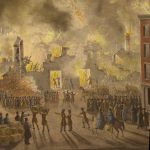 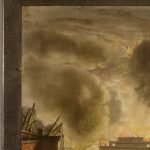 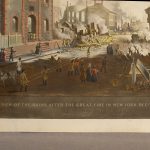 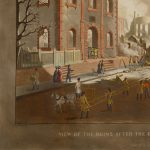 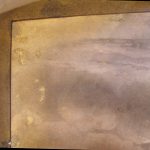 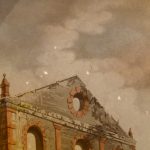 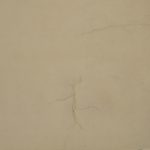 Prints of The Great Fire of New York 1835

Two scarce hand colored aquatints depicting the height of the conflagration and aftermath of the Great Fire of New York in 1835 after Nicolini Calyo ( It./USA). These were engraved by Wm. J. Bennett and Published by Lewis Clover of New York City in 1836.

It is reported that sub zero temperatures and gale force winds contributed to the cause of the fire. From Wikipedia “The fire occurred in the middle of an economic boom, covering 17 city blocks, killing two people, and destroying hundreds of buildings, with an estimated $20 million of property damage… For more information of the event see

A print of the view of the ruins is in the collection of the New York Historical Society, New York City.

Both have been backed with tissue. There are small repairs and touch ups. When seen in normal lighting conditions most of the touch ups are not noticeable.

The view of the fire has been trimmed slightly into the gray border which has several colored touch ups. There are also some touch ups to the image color, mostly in the upper left sky (see detail close up exaggerated by strong light from behind).

The view of the aftermath of the fire has generous margins, scattered small color touch ups in the sky and left margin and two touched up lines in the image approx. 6" long (see close up images, exaggerated by lighting from behind).

Prints of The Great Fire of New York 1835

This is a Chinese porcelain tureen made for the Western market. It displays finely delineated details, a colorful pallet and complex design elements. The cover and under plate have a heraldic device of a phoenix. All three pieces have the same Mandarin courtyard scene. The base has a rabbit formed handle on each end.