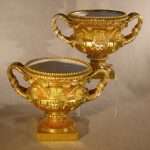 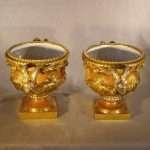 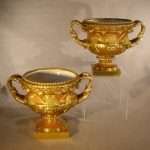 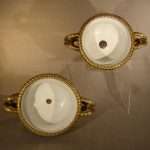 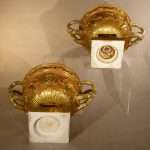 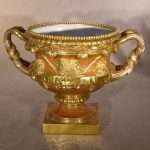 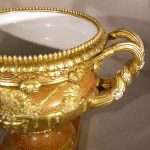 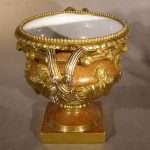 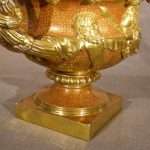 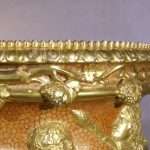 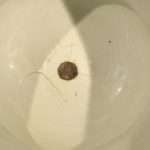 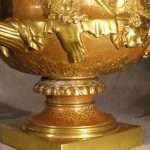 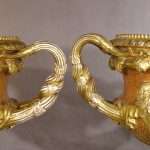 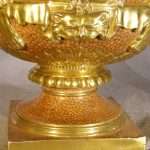 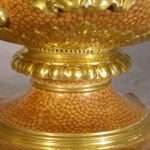 These are modeled after the original “Warwick Vase, an ancient Roman marble vase with Bacchic ornament that was discovered at Hadrian’s Villa, Tivoli about 1771…” (see Wikipedia https://en.wikipedia.org/wiki/Warwick_Vase ). The original is based on Roman design and thought to have been produced in the 2nd Century. These may have been made to be used as wine coolers. The white porcelain body is painted all over on the smooth exterior in an asymmetrical cell pattern in rusty brown. Each cell is bordered or dabbed with gold. The molded faces, borders and devices are completely gilded.

Some porcelain models of the Warwick vase are known to have been produced by Chamberlain’s Worcester but this pair is unmarked by its maker. One base is filled in the center, possibly to hold the bold in place that joins the upper with the lower parts.

Good + and quite attractive

There is some wear to the gold, especially on the high ares of the handles, the tops of the beaded rim and the cell pattern. The top of one socle is beaded while the other may have lost it original beads or never had it. The interior of one vase has had some hair lines consolidated, cleaned, touched up and over-glazed while one has some untouched hair lines at the bottom center. A few small chips have been restored and one large chip and gilding on the base of one has been restored. All repairs are professionally done and difficult to detect. 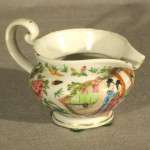 A great example of this type of decoration which features unusually well painted figures of Mandarins in a courtyard, butterflies, peonies, carrots and a bug. The colors are strong.