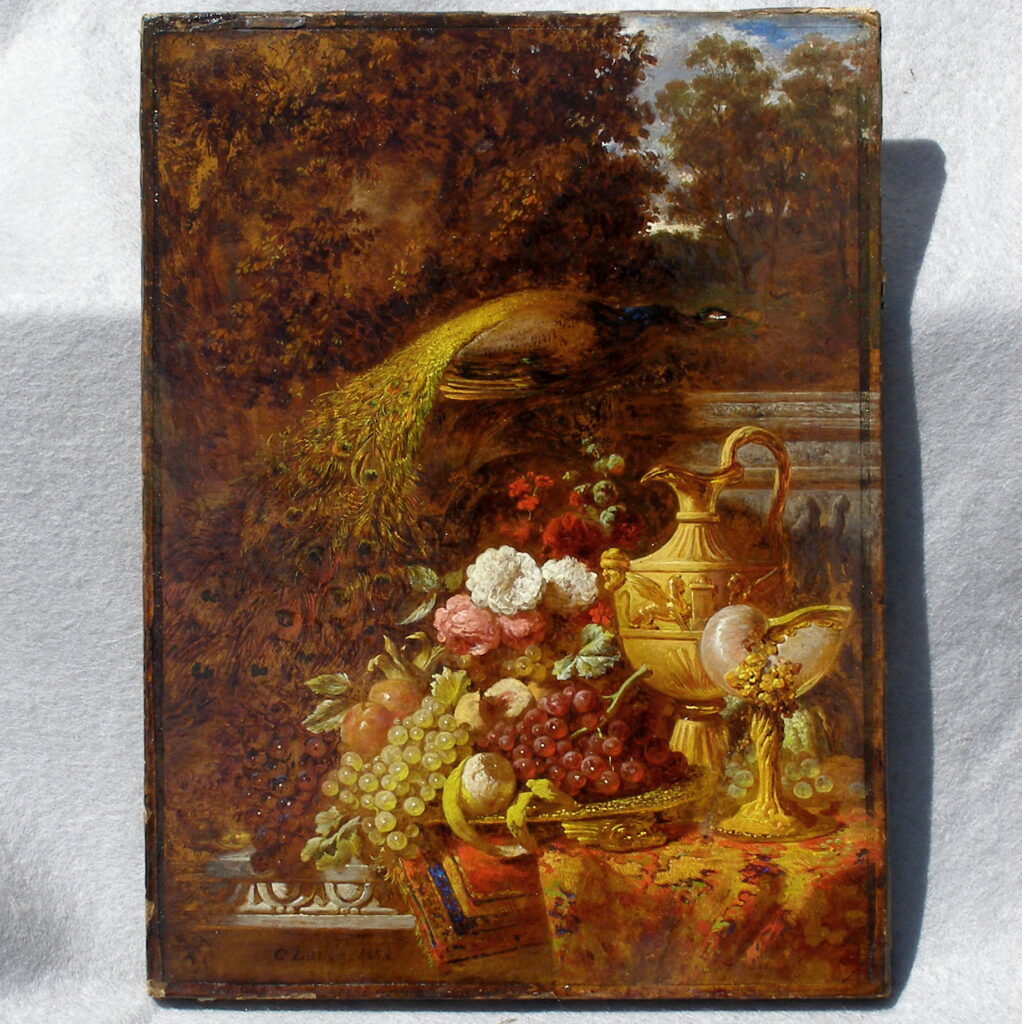 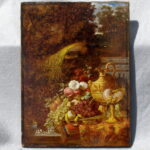 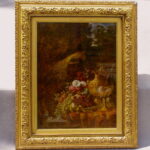 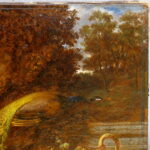 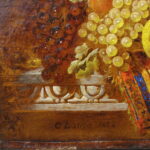 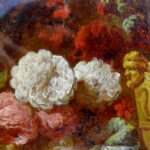 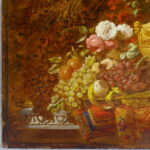 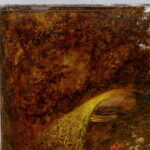 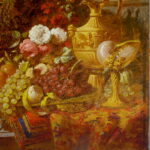 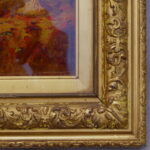 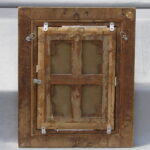 An exquisitely detailed oil on paper mounted on board bearing a signature “G Lance 1858”. It shows a seated peacock perched  above a garden wall before a wooded landscape. Below the peacock is a table piled with various fruits, flowers,a ewer and an Oriental carpet.

Lance was born at the old manor-house in Little Easton in Essex. His father was William Lance who had previously served in a regiment of light horse and was at the time of Lance’s birth an adjutant in the Essex yeomanry; he later became the inspector of the Bow Street horse-patrol. His mother, Louisa Lucy (née) Constable, with whom his father had eloped from boarding-school, was the daughter of Colonel Constable of Beverley in Yorkshire.

Although Lance showed a predilection for art at a very early age, he was placed, while not yet fourteen, in a factory in Leeds. However, the work injured his health and he returned to London. Wandering one day into the British Museum, he casually started a conversation with Charles Landseer, who happened to be drawing there. On learning that Landseer was a pupil of Benjamin Haydon, he went early next morning to that painter’s residence, and asked to become a pupil. Haydon replied that if his drawings promised future success he would instruct him for nothing. Not many days later Lance, still not yet fourteen, entered Haydon’s studio, and remained there for seven years, at the same time studying in the schools of the Royal Academy.

While designing a picture inspired by Homer’s Iliad, he decided, before putting on the colors, to paint some fruit and vegetables as practice. This work attracted the notice of Sir George Beaumont, who purchased it, and this success led him to paint another fruit-piece, which he sold to the Earl of Shaftesbury. He then painted two fruit-pieces for the Duke of Bedford as decorations for a summer-house at Woburn Abbey, and his work proved so profitable that he decided to devote himself to still-life painting.

He began to exhibit in 1824 when he sent to the British Institution A Fruit Boy, and to the Society of British Artists – The Mischievous Boy and two fruit-pieces. In 1828 he exhibited the Royal Academy for the first time showing a still-life with an appended quotation from Samuel Butler’s “Hudibras”.

Although he gained his reputation chiefly as a painter of fruit and flowers, Lance sometimes produced historical and genre works, and his picture of Melanchthon’s First Misgivings of the Church of Rome won the prize at the Liverpool Academy in 1836. His works appeared most frequently at the exhibitions of the British Institution, to which he contributed 135 pictures, and he also sent 48 works to the Society of British Artists, and 38 to the Royal Academy..

He also exhibited many fruit-pieces and pictures of dead game, painted with great richness of color and truthfulness to nature. Lance died at the residence of his son – Sunnyside, near Birkenhead – on 18 June 1864. Christie’s auctioned the contents of his studio on 27 May 1873; there were nearly 400 works offered at auction.

His most distinguished pupils were Sir John Gilbert and William Duffield, the latter an artist of great promise who died young in 1863. His works are in City of Manchester Art Galleries, Manchester, Walker Art Gallery, Liverpool, National Gallery of Victoria, Melbourne, National Museum of Art, Architecture and Design, Oslo, Victoria and Albert Museum, London, Rijksmuseum, Amsterdam, Ashmolean Museum at the University of Oxford, UK and Tate Gallery, London

The signature on the lower left is suspect. It may be a 19th century copy based on a closely related painting by Lance in The Williamson Art Gallery & Museum at Claughton, Birkenhead, Merseyside, England titled the Golden Peacock. The horizontal brace on the back of the frame is signed in script G Lance, 1858.

The surface has an orange peel aspect telegraphing the underlying board and adhesive. At the lower right corner is a small amount of in-painting where the paper cracked and was laid flat. The outer edges about 1/4" in have a gap that has been colored to match. Other slight touch ups. It appears to have been originally mounted on a linen canvas, perhaps removed, a board mounted on top of the canvas and then the painting fixed to the board.

The gilding on the frame is in good condition except the side edges show wear and scratches. There is glass mounted between the main body of the frame and the inner liner. 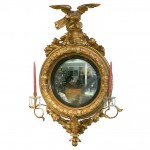 A complete example with upper and lower foliage, candle arms, period crystal bobeche, and a vigorously executed eagle to top it all off.