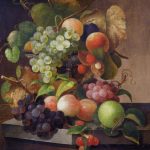 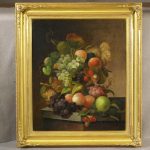 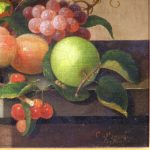 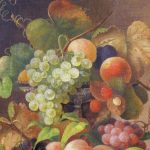 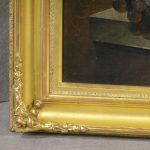 A fine quality oil on canvas of various fruits piled high on the edge of marble top table by this German/American artist. The painting is signed lower right “C Baum, Egg Harbor”

Baum (1812-1878) settled in New York with his wife after their arrival in America. This was painted after they moved to Egg Harbor City, New Jersey where they remained for most of their lives.

Baum was influenced by the work of Severin Roesen who is known for his magnificent fruit paintings and they shared a common bond,  both being emigres from the Rhineland. Baum like Roesen is primarily known for his still life paintings but also painted animals and landscapes. Baum exhibited at the American Art-Union in New York City in December of 1852 and several of Baum’s landscapes were exhibited in New York City in 1871 at the first annual exhibition of The Palette Club.

Excellent Antique Condition. The canvas has been lined and a few professional touch up areas are in-painted the largest is a tear on the top branch area at the upper center. The repairs are only noticeable on a sharp angle with a raking light. Appears to retain its original stretcher. 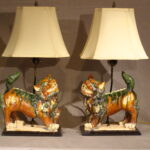 A pair of Chinese earthenware glazed temple lion/foo dog figures made into lamps. I’m not sure of the age but my best guess is late 20th Century. The bases are black lacquered, brass fittings and cream colored silk shades.